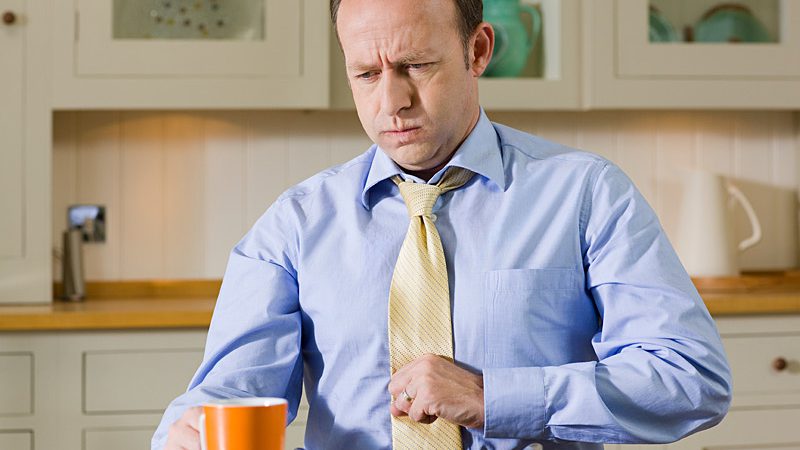 Acid reflux occurs when stomach contents moves backward into the esophagus. It’s also called acid regurgitation or gastroesophageal reflux (GER). Acid reflux is a common digestive condition. According to the American College of Gastroenterology (ACG), more than 1 in 5 experience acid reflux at least once a month.

Acid reflux usually causes a burning sensation in the chest. The sensation radiates up from the stomach to the mid-chest or throat. This is also known as heartburn.

Acid reflux may also cause a sour taste in the back of the mouth. Chronic reflux can sometimes lead to difficulty swallowing and in some cases it can even cause breathing problems like asthma.

The muscle at the end of the esophagus is called the lower esophageal sphincter (LES). The LES is a one-way valve that normally opens for limited amounts of time when you swallow. Acid reflux occurs when the LES doesn’t close properly or tightly enough. A faulty or weakened LES allows digestive juices and stomach contents to rise back up into the esophagus.

Large meals that cause the stomach to stretch a lot can temporarily loosen the LES. Other factors associated with reflux include:

If you notice that your reflux only occurs with certain foods, try eliminating them from your diet. Some people also find that sitting up straight during and after eating improves their symptoms.

Most people experience occasional acid reflux or GER. However, in some cases the digestive condition is chronic. It’s considered gastroesophageal reflux disease (GERD) if it occurs more than twice a week.

Acid reflux can affect infants and children as well as adults. Children under 12 usually don’t experience heartburn. Instead they have alternative symptoms like:

These alternative symptoms can also appear in adults.

Adults aren’t the only ones affected by acid reflux. According to the National Digestive Diseases Information Clearinghouse (NDDIC), more than half of all babies experience infant acid reflux during their first three months of life. It’s important for your pediatrician to differentiate between normal reflux and GERD.

Spitting up and even vomiting is normal and may not bother the baby. Other signs of normal reflux include:

These symptoms generally aren’t harmful to the baby.

GERD in children can easily be missed. Infant acid reflux usually goes away on its own around 12 to 18 months of age. If symptoms persist beyond 18 months of age or become severe, talk to your child’s pediatrician. Your child’s symptoms may be a sign of GERD. Serious symptoms include:

Call your pediatrician immediately if your infant:

To reduce reflux symptoms, your pediatrician may suggest:

You also may be referred to a pediatric gastroenterologist. Sometimes further testing is necessary.

Esophagitis is a general term for inflammation of the esophagus. It can be accompanied by irritation.

Reflux esophagitis is a type of esophagitis associated with GERD. It’s caused by stomach acid backing up into the esophagus. This damages the esophageal tissues. It often causes heartburn, which may become chronic.

GERD is a chronic digestive disease. It affects people of all ages, including children. It’s the more serious form of GER and can eventually cause more serious health problems if left untreated. Acid reflux that occurs more than twice a week and causes inflammation of the esophagus is considered to be GERD.

Most people with GERD experience symptoms such as:

Consult your doctor if you have symptoms, or use over-the-counter (OTC) antacids or reflux medications for more than two weeks.

Living with acid reflux is inconvenient. Fortunately, symptoms can generally be controlled through:

Most people with reflux will not have long-term health problems. However, GERD can increase the risk of Barrett’s esophagus. This is a permanent change in the lining of the esophagus.

Barrett’s esophagus increases the risk of esophageal cancer. However this type cancer is very rare, even in people with Barrett’s esophagus. According to the National Center for Biotechnology Information (NCBI), over a period of 10 years, only 10 out of 1,000 people with Barrett’s will develop cancer. Nevertheless, patients with chronic, unremitting GERD despite medical treatment are often referred for endoscopy.  In this procedure, a specialist doctor will examine the lining of your esophagus using a specialized instrument (endoscope), looking for changes of Barrett’s esophagus or cancer in order to try and find the problems early enough to be able to offer you effective treatment.

Adapted from an article written by The Healthline editorial team.
Medically Reviewed on October 31, 2014 by Kenneth R. Hirsch, MD